Skip to content
Previous Next
Before a Test, a Poverty of Words 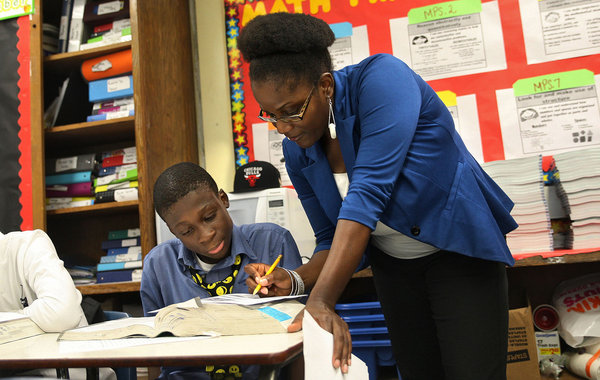 PREP Simone Brown helping a student at Intermediate School 292 in Brooklyn prepare for the Specialized High Schools Admissions Test, the subject of a recent lawsuit.

Not too long ago, I witnessed a child, about two months shy of 3, welcome the return of some furniture to his family’s apartment with the enthusiastic declaration “Ottoman is back!”  The child understood that the stout cylindrical object from which he liked to jump had a name and that its absence had been caused by a visit to someone called “an upholsterer.” The upholsterer, he realized, was responsible for converting the ottoman from one color or texture to another. Here was a child whose mother had prepared him, at the very least, for a future of reading World of Interiors.

Though conceivably much more as well. Despite the Manhattan parody to which a scene like this so easily gives rise, it is difficult to overstate the advantages arrogated to a child whose parent proceeds in a near constant mode of annotation. Reflexively, the affluent, ambitious parent is always talking, pointing out, explaining: Mommy is looking for her laptop; let’s put on your rain boots; that’s a pigeon, a sand dune, skyscraper, a pomegranate. The child, in essence, exists in continuous receipt of dictation.

Things are very different elsewhere on the class spectrum. Earlier in the year when I met Steven F. Wilson, founder of a network of charter schools that serve poor and largely black communities in Brooklyn, I asked him what he considered the greatest challenge on the first day of kindergarten each year. He answered, without a second’s hesitation: “Word deficit.” As it happens, in the ’80s, the psychologists Betty Hart and Todd R. Risley spent years cataloging the number of words spoken to young children in dozens of families from different socioeconomic groups, and what they found was not only a disparity in the complexity of words used, but also astonishing differences in sheer number. Children of professionals were, on average, exposed to approximately 1,500 more words hourly than children growing up in poverty. This resulted in a gap of more than 32 million words by the time the children reached the age of 4.

This issue, though seemingly crucial, has been obscured in the recently intensified debate over the Specialized High Schools Admissions Test, the multiple-choice exam used as the sole metric for entrance into some of New York City’s elite public high schools, including Stuyvesant and Bronx Science.

Thousands of students in the city are in the throes of preparing for the test to be administered the last weekend of this month. Two weeks ago, the NAACP Legal Defense and Educational Fund, along with other organizations, filed a federal civil rights complaint challenging the single-score admissions process as perilously narrow and arguing that it negatively affected black and Hispanic children, who are grossly underrepresented in these schools, so long considered forceful agents of mobility.

As the complaint makes note, of the 967 eighth-grade students offered admission to Stuyvesant for the current school year, only 19 were black and 32 Hispanic. During the previous school year, only 3.5 percent of students at Bronx Science were black and 7.2 percent Hispanic. At Staten Island Tech, the figures were even lower. Mayor Michael R. Bloomberg quickly defended the process, contending that it was so free of subjectivity that it must inherently be regarded as fair.

Others called the system Darwinian. The Education Department, required by state law to rely exclusively on the test, volunteered defensively that it offered free exam preparation to low-income students. The fact that so many children of means take costly tutorials to ready themselves for testing has always been a matter of concern to anyone hoping to see the racial imbalances redressed.

And yet, all of this focus on the test — which examines reading comprehension, math skills, the ability to reason logically — suggests a myopia of its own. Expanding the ranks of poor black and Hispanic children in the top high schools would seem to require infinitely more backtracking. Consider that Christa McAuliffe Middle School in Brooklyn, one of the major pipelines to top public high schools, last year had a student population that was 0.52 percent black.

As the education theorist E. D. Hirsch recently wrote in a review of Paul Tough’s new book, “How Children Succeed,” there is strong evidence that increasing the general knowledge and vocabulary of a child before age 6 is the single highest correlate with later success. Schools have an enormously hard time pushing through the deficiencies with which many children arrive.

According to state education data, a far higher percentage of children in New York City charter and district schools in grades three through eight score at the highest level (a four) in math than they do in what is known as English Language Arts. In the 2011-12 school year, only 3.2 percent of children in district schools scored at the four level on the end-of-year statewide English exam. (For charter schools, the figure was 1.9 percent.)

All of this would seem to argue for a system in which we spent ever more of our energies and money on early, preschool education rather than less. The city has taken the right direction with the announcement of a new preschool in Brownsville, Brooklyn, scheduled to open next year, that will start with children as young as 6 weeks old. But that’s one program in a city where 7,500 children reached kindergarten this year without preschool preparation. Obviously we want equal opportunity; we also want children to know what words like “equal” and “opportunity” mean.